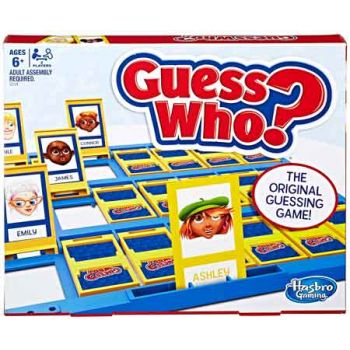 Notify me when available
"Guess Who? Classic Game It's the classic Guess Who? game â€“ the original guessing game! Is your person wearing a hat? Does your person have blue eyes? Kids will delight in asking questions about an opponent's mystery character. The first player to guess their opponentâ€™s mystery character correctly, wins the game! Guess Opponents Mystery Character This Guess Who? game goes back to the tabletop style boards, styled after the original. Each player chooses a mystery character, then using yes or no questions, try to figure out the other playerâ€™s character. When they think they know who their opponent's mystery character is, they take a guess. If the guess is wrong, that player loses the game! Players can also challenge opponents to a series of games in the Championship Series, where the first player to win 5 games is the champion. Ask Quick and Clever Questions Players ask yes-or-no questions about their opponent's card, such as ""does your character wear glasses?"" If the answer is no, the asker closes the doors on characters with glasses, leaving the remaining possibilities open. If the answer is yes, they close the doors on characters without glasses. Once a player knows their opponent's character, it's time to make a guess. Who will guess right and win the game? Make Memories with Classic Hasbro Games Whether via a game board with dice, a deck of cards, simple lines drawn on scrap paper, or electronic media, gaming is a global pastime that has enriched culture for millennia. From the classic tabletop board games to up-and-active games for preschoolers, to the laugh-out-loud party games, Hasbro Gaming is a one-stop-shop for filling your games closet. While continuing to produce some of the most memorable games in the history of family gaming, Hasbro Gaming stays current and innovative."

18 other products in the same category: